Well, it’s been since August now that the 1989 Toyota Odyssey 4x4 motorhome had an engine upgrade.  I took out the Toyota 3.0 V6 engine w/ blown headgasket and rusted block and swapped a 1999 Toyota 3.4 V6 engine in its place.  If you search the internet for reviews of this swap, you’ll find all kinds of advice, but the general consensus is that the power increase is noticeable and the gas mileage is improved...

1)         There is a noticeable increase in power, but not a very significant increase.  The horsepower was boosted from the 3.0’s 145 hp to the 3.4’s 190 hp.  With the old 3.0 engine, I could never get into 5th gear, my average highway speed was about 45-50mph, and the motorhome severely slowed down on long uphills, sometimes needing 1st or 2nd gear on main roads and highways.
The new 3.4 engine gave me an slight increase in top end speed (average speed is about 55 mph now), I can use 5th gear occasionally on flat ground or downhills, I rarely ever shift below 3rd gear on main roads/highways, and I have much more torque to climb long hills (the 3.4 almost feels like a diesel as it just pulls through the hills with its torque).  It’s really nice being able to almost keep up with Alaskan highway speeds now, occasionally I’ll hit 60 mph.

2)         Most people say you get a boost in miles per gallon (people claim 15-17mpg), but my oxygen sensors aren't hooked up yet (long story), which is giving me a significant decrease in miles per gallon (I went from getting an average of 12.5 mpg with the old 3.0 engine to getting an average of about 9 mpg with the new 3.4 engine). I'll be hooking those up in the next few weeks, still sorting some wiring harness issues out.

3)         You will have a boost of confidence on long road trips knowing you have one of the best engines (3.4) that Toyota has ever manufactured, much more reliable than the 3.0.

4)         While I would definitely recommend this 3.0 to 3.4 engine swap, if I would have known the gas mileage was going to drop 4 mpg instead of increase 4 mpg, I might have just swapped a V8 engine in its place instead of the 3.4 V6.  I still feel like there is not enough power as I would like, so the next upgrade I will make is adding a Toyota Supercharger to the 3.4 to give a significant horsepower increase and truly get me up to highway speeds (65 mph).

5)         You should probably order the 3.0 to 3.4 adapter kit from Offroad Solutions (ORS).  I ordered their 3.0 to 3.4 wiring harness adapter (which made the wiring much easier) and their exhaust manifold adapter (which switches the side the exhaust is on to fit your old Toyota 3.0 exhaust).  You will also have to custom make engine mounts unless you order them from ORS.  ORS is a great company and they can really help walk you through the engine swap on any complicated questions when all seems lost.  To save a little bit of headache, I put on a K&N Cold Air Intake so I could leave my battery on the same side of the engine as the 3.0 and not have to move the air filter box to the other side either.


1) RV refrigerators don’t last forever.  If your fridge has a strong smell of ammonia, it’s time to get a new fridge.  The fridge in my Toy home died just 2 days before we left on our 8,000 mile road trip/band tour to Burning Man and back to Alaska.

Once your fridge is dead, it’s cheaper to buy a new fridge than actually repair the contained cooling system.  There’s a good chance your fridge won’t fit through your RV house door, but it’s very easy to remove the passenger seat of the Toyota motorhome and just fit the fridge through the passenger door.


2) KNOW the exact height of your motorhome! – it’ll take you 3 minutes… just get a tape measure out and do it!  I know the height of mine (12 feet 2 inches to the top of the wind-directional chimney cap)… but I never measured the height when the bikes were on the roof rack… BIG mistake.  I miscalculated how tall the RV was with the bikes on top and hit an old, stone arch bridge in Ashland, OR and broke the bike fork in half, ripped the roof rack off the RV, and spent the next day fixing everything in a parking lot.

Every time I approach a bridge now I treat my motorhome like an 18 wheeler and look ahead to see the bridge height maximum clearance label before I pass under the bridge, this has saved me a ridiculous amount of times (the bikes on top bump me up to a 13 foot 2 inch clearance).  Something to think about.

3) Free internet! If you’re living off-grid in your motorhome, you’ll find coffee shops your best friend.  Spend a couple bucks on a coffee and then you have a place to hang out for hours with free internet and free heat to stay warm in the winter… some coffee shops even give you free refills the same day.

4) Park late and wake up early to avoid trouble! This is one of the easiest tricks in the book of off-grid motorhome living.  First, make yourself a list to hang up in your RV of all the “free” places you can think of to park overnight (public streets, neighborhoods, non-municipal parks, retail stores, abandoned side roads, mountain road or highway pull-outs, etc)… this helps you make an easy decision every night of where to stay.

5) Never stay in the same spot 2 nights in-a-row, this is how you get busted and ruin it for everybody else that is trying to live unconventionally.  I can’t tell you how many times I’ve seen people living on the streets in RV’s that just sit in one spot for several days, sometimes up to a week… and sure enough a “NO OVERNIGHT PARKING” sign pops up and that once-awesome camping spot disappears forever.

How do you avoid this situation? Get to your camping spot LATE at night (after 10:00 pm at the earliest) and LEAVE by 7:00 am.  Most people are home by 10 pm and won’t leave for work until after 7 am, which means you won’t have a bunch of passer-bys calling your RV in to the local police department. 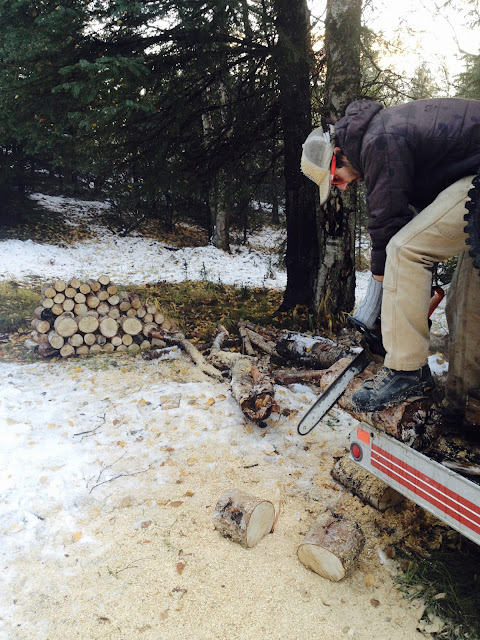 6) PREPARE for winter!  If you have a wood stove in your motorhome and no where to plug into electricity, make sure you have enough wood to last you the entire season... you can't count on your propane furnace to keep you warm once your RV house battery dies.  On a cloudy week, my solar panels can't quite keep up with using the propane furnace too much, so the Kimberly wood stove is literally a life saver. 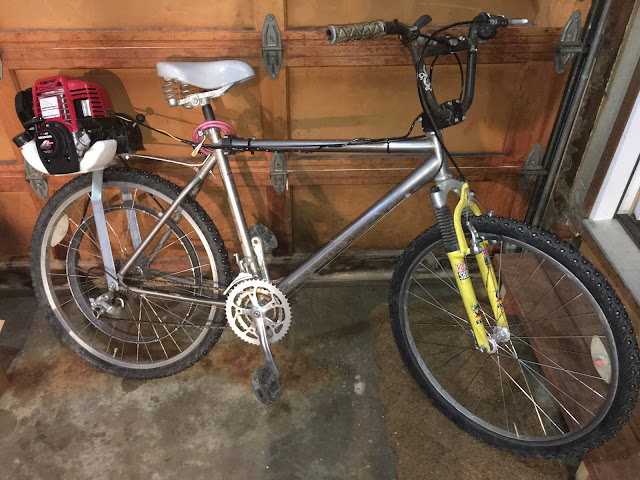 I recently realized I may or may be a motorhead at heart, cause I just love engines.  Whitewater kayaking in the summer involves driving to the put-in on the river, then kayaking downstream… but how do you get back to your car after paddling the river if you carpooled with friends in one car?

Hitch-hiking isn’t an option for half of the remote whitewater streams we paddle, so I sold some stuff I didn’t need anymore in my storage and bought myself a Golden Eagle Bike Engine kit.  Should make kayaking shuttles (and runnin' errands around Anchorage) cheap and fun.  These kits are made in Minnesota and are the only belt-drive, rear engine mount kit available for bikes.  After doing a lot of research, this kit seemed the best way to go for several reasons:

2)    The clutch can be disengaged and the belt can quickly be removed in a few seconds, allowing for a completely friction free system (compared to a chain drive system which can’t be disconnected and creates drag when pedaling).  The belt drive system is also much quieter to ride around the city/sidewalks than a noisy chain drive system.

3)    The Honda GX35 4-stroke engine is super reliable, requires no mixing of gas & oil (so you can easily fill up at any gas station while riding around, and provides plenty of power. 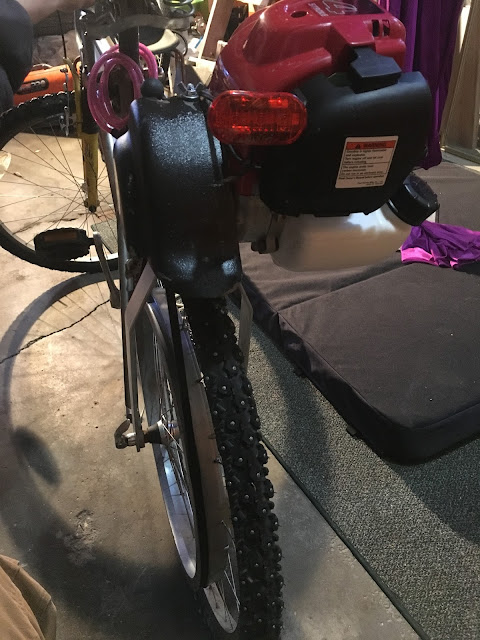 The Golden Eagle Bike Engine kit took about 30 minutes to install and was very straight forward.  The only real modification I had was having to drill a hole in the frame of my bike to attach the front engine mount bracket. 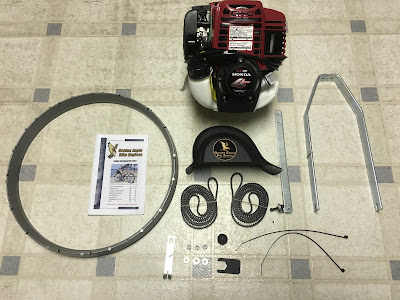 REVIEW: I have had the Golden Eagle Bike Engine kit since early December and kit has proven to be very reliable and super fun to drive around town (I’ve put about 450 miles on the kit so far).  I had to invest in some studded winter tires for my bike (26”x2.1”) because of the ice and snow from our Alaskan winters.
The gas reservoir holds about 1/3 a liter of high octane (91) gasoline, which means it only cost about 18 cents to fill up!  You’ll make it around 15-ish miles on that tiny tank, which means I get about 180 miles per gallon!  Top crusing speed seems to be around 25-30mph and it’s pretty easy to keep up with traffic in town.  The engine mounts seem to be pretty solid jumping curbs and heading off-road.  Pedaling at start up for a few pedals helps take a big load of the engines little clutch and helps keep down the wear & tear on the engine.  The belt seems to be holding up just fine, but I ordered a spare belt just in case.

I carry a 1 liter MSR fuel canister in my bike’s water bottle holder just incase I run out driving around somewhere.  The Honda engine starts within the first 2 pulls every time, it’s really nice being able to rely on an engine.  My next project is ordering a long drive belt and fabricating a wider drive ring for the wheel so I can install this kit on my fat bike (which was my original plan, but the fat bike has 5” wide tires so the stock Golden Eagle Bike Engine kit won’t fit).  Overall, the engine kit is pretty awesome & I would recommend if if you're looking for a cheap shuttle/transportation solution.  I figured it will pay for itself in gas money saved since us kayakers can just hop in one car and take the bike for the shuttle. 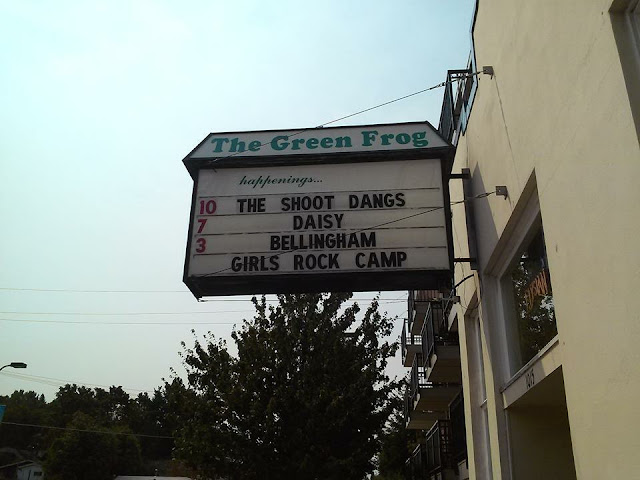 This past fall our band, The Shoot Dangs!, did our 2nd national tour.  We loaded up in my Toyota RV and left Anchorage, Alaska on an 8,000 mile round-trip, taking the ferry on the Inside Passage of Alaska to play shows in Haines, Skagway, and Juneau then shows throughout Washington, Oregon, California, & Nevada, with Burning Man being the furthest stop of the trip.

We had an incredible time, made a lot of new friends and connections, and finally got to see all the small Alaskan coastal times, super cool to see if you haven’t seen them yet.  Our band has been on a little bit of a break while band members are out of state, but our first shows of the New Year are this February 11th, 12th, & 13th here in Alaska (Chair 5 Pizza Pub on 11th, Taproot on the 12th, Moose Pass Winter Festival on the 13th).  Looks like we’ve picked up a pretty wicked fiddle playin’ gal from Kentucky, so we’re looking forward to filling in our sound!  You can check out our live show schedule/music samples at www.reverbnation.com/theshootdangs .


This has been the first decent winter in Alaska we've had in a while.  The snowmachine skiing has been off the hook! Been trying to get out as much as possible, here' s a few random pictures of the shenanigans.  A few of us are in the process of creating a new freeride, film & music festival in Thompson Pass this April 14-17th (called Snowjob), which will be free to the public.  For more information, go to the event page:

Posted by AlaskaCreeker at 4:19 PM 18 comments: